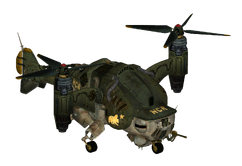 You'll Know It When It Happens
Arizona Killer

As of 2281, Aaron Kimball uses it to travel to his various speeches, meet and greets, and other appointments. It is well armored and closely guarded when upon the ground. The aircraft is currently hindered by a glitch in its flight computer, though this can be easily fixed by NCR engineers with a computer software update once on the ground.[2]

Painted on the side of Bear Force One is the NCR bear logo. The vertibird is the same model as the ones seen elsewhere but possesses a unique paint job, including golden NCR logos. The aircraft has a high Damage Threshold, and shooting or aiming at the vertibird will result in being attacked by nearby NCR forces.

It only appears during the quests You'll Know It When It Happens and Arizona Killer. The aircraft flies in from over the northwestern ridge near Hoover Dam, landing on the visitor center.

"Bear Force One" is a reference to the U.S. presidential airplane "Air Force One" and the two-headed bear symbol of the NCR.

Retrieved from "https://fallout.fandom.com/wiki/Bear_Force_One?oldid=3367974"
Community content is available under CC-BY-SA unless otherwise noted.