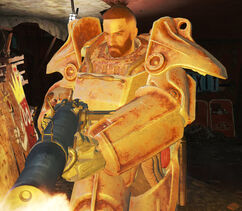 Commander Bear is a challenger to the overboss in Nuka-World's Cola-cars arena in 2287.

Bear is a Gunner commander. He sports T-45 power armor and an assault rifle. He survived through the Gauntlet and, unlike Anise, is willing to face the overboss. He will challenge the Sole Survivor during the quest Amoral Combat.

Amoral Combat: Another combatant has made it through The Gauntlet. As the overboss, the Sole Survivor must kill them.

Commander Bear appears only in the Fallout 4 add-on Nuka-World.

Retrieved from "https://fallout.fandom.com/wiki/Bear_(Nuka-World)?oldid=3257055"
Community content is available under CC-BY-SA unless otherwise noted.