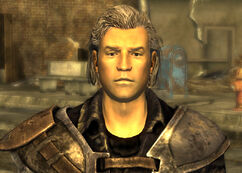 They Went That-a-Way
My Kind of Town

“Now you freed Deputy Beagle, all Primm needs is a lawman who can shoot a gun without wetting hisself.”— Primm citizen about Beagle

Deputy Beagle is the deputy of Primm in 2281.

Beagle was deputized by Sheriff McBain about two and half months[1] before the attack on Primm, on account of being brother to the sheriff's wife.[2] As a deputy Beagle decided that discretion was the better part of valor and started observing the convicts and taking notes and witnessed a meetup between Benny, the Great Khans and Powder Gangers. While taking his audio log he was noticed and made his escape.[3] Not long afterward, escaped convicts snuck into the town at night and killed the Sheriff and Beagle's sister in their sleep. Beagle was asleep in the office but woke up just in time to witness the murder. While cowardly hiding in the corner of the office he was caught and thrown into the kitchen as a hostage.[4] This event was also witnessed by Sergeant McGee who was on scout, however, he chose not to act, instead citing lack of a long rifle and proper orders.[5] The Powder Gangers tortured Beagle while he was captured. He couldn't resist the torture and told them the little he knew about the town and has since remained their hostage for ransom, but no one in town can pay the price the convicts are asking.[6][7][2]

The deputy is not treated seriously by the other denizens of Primm, on account of his lack of common sense, intelligence, and general usefulness.[2] He tries to cover it up by using a gentlemanly demeanor and a sophisticated vocabulary that he more often than not mispronounces.[8][9][10] This would be fine if Beagle did his job well, but Beagle is also a lazy coward who's unable or unwilling to defend himself or others without help; always seeking out excuses to not be proactive with law enforcement[9] and leaving things half-finished.[11] Even when it comes time to step up and become the town sheriff, Beagle pushes a job of actual weight off on to someone else[12] so he can stay a deputy.[13] This is probably for the best as Beagle even opines several times that a quality a sheriff should have is bravery.[14][15] Justifiably, his unwillingness to become sheriff bites him in the end and he is deposed as deputy no matter who is ultimately made sheriff of Primm.[16]

At the conclusion of the quest My Kind of Town, regardless of who becomes the new sheriff, he loses the rank of deputy sheriff, or in his own words becomes "just a Beagle."

Beagle, still tied up by the escaped convicts
Add a photo to this gallery

Retrieved from "https://fallout.fandom.com/wiki/Beagle?oldid=3376197"
Community content is available under CC-BY-SA unless otherwise noted.
... more about "Beagle"
RDF feed
Has platform
PC +, Playstation 3 +  and Xbox 360 +