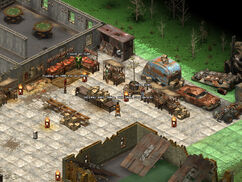 Bazaar Day is a special encounter in Fallout Tactics.

This encounter contains a number of NPC traders who sell various items and a special item called the Devilthorn jacket. The jacket itself is unusable by the player (Min Str: 75) and is a reference to the Demonspike Coat unique armor from the game Diablo. Ghoul armor is also for sale here. The floating text here contains references to phrases commonly used by players from the MMORPG, Everquest.

Like the Brothers Grimm encounter, there is a bug that causes the player character to be unable to exit the area after revisiting. An alternative is to attack the vendors and escape.