Battle of the Castle 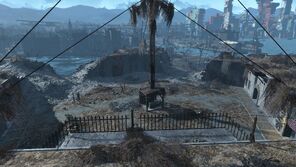 The Castle, The Commonwealth

The Battle of the Castle was an attack on the Castle, headquarters of the Commonwealth Minutemen, by a large "sea creature."

The battle was started by a mirelurk queen rising from the sea, breaching the Castle's western wall, and attacking those inside. Believing the attacker to be super mutants, General McGann took a tunnel from his quarters to the armory to defend their weapons, and then proceeded to trap himself inside. While he was doing this, the base was ultimately lost.

Following the battle, the Castle was turned into a mirelurk nest, with large numbers of mirelurks and egg clutches present. General McGann stayed trapped within the armory where he ultimately died, but prevented others from entering. The Minutemen were wounded by the Castle's loss, especially the loss of its radio, which allowed communication throughout the Commonwealth. The loss of McGann led to the eventual near-complete disbanding of the Minutemen by sowing doubt and reducing cohesion among the ranks before the Quincy Massacre.

Retrieved from "https://fallout.fandom.com/wiki/Battle_of_the_Castle?oldid=3322914"
Community content is available under CC-BY-SA unless otherwise noted.