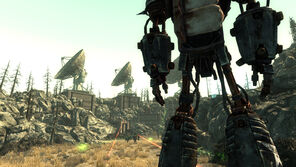 Liberty Prime leading the assault on the satellite station

Head Scribe Rothchild and the rest of the Brotherhood became curious about how even with Raven Rock destroyed, the Enclave was still able to communicate and coordinate their scattered forces. He and his scribes tracked down the sources of their broadcasts to a facility in Rockland. Paladin Tristan, the new leader of the Lyons' Pride, led his soldiers to Rockland to prepare for an assault on the facility alongside Liberty Prime. That day, the Lone Wanderer awoke from their coma after the Battle of Project Purity. The Lone Wanderer was then briefed on the recent developments and sent to the facility to assist Tristan.

Operations Officer Paladin Edwards led the team through the facility. After clearing out the entire complex, the Lone Wanderer discovered a terminal holding encrypted telemetry data, holding the location of the Enclave's headquarters. The Lone Wanderer escaped the building and headed back to the Citadel, handing the data to Rothchild.

Liberty Prime's remains were carried back to the Citadel. With him destroyed, the Brotherhood's last option to counter the Enclave's vertibird was the Tesla cannon project. Rothchild later decrypted the telemetry data and discovered that Adams Air Force Base became the Enclave's new headquarters.

The Battle of Rockland appears in the Fallout 3 add-on Broken Steel.

Retrieved from "https://fallout.fandom.com/wiki/Battle_of_Rockland?oldid=3522062"
Community content is available under CC-BY-SA unless otherwise noted.