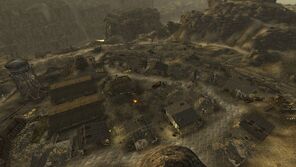 “I'm just the only ranger around. The rest of the kids here are troopers, inexperienced, out-numbered and under-equipped.”— Ranger Milo

The Battle of Nelson was a military conflict in 2281.

Nelson, a former mining town, was occupied by NCR in an effort to secure a vulnerable stretch of land along the Colorado River, considered by General Lee Oliver to be a significant security gap between Forlorn Hope and Searchlight.[3] Due to the short notice of occupying Nelson, the intermediary base had barely enough time to set up proper defenses. Caesar and Vulpes Inculta[1], likely acting upon information provided by their mole at Camp McCarran, ordered the invasion of the town as a demoralizing effort for the area.[4][2]

Two contubernia under the command of Decanus Dead Sea attacked Nelson, surprising the under-equipped soldiers stationed there.[2] Although outnumbered two to one, the legionaries swiftly overran the defenses, killed most of the NCR troopers and executing the rest by hurling them into the Colorado River in full view of spotters from Camp Forlorn Hope. Three soldiers that weren't executed were promptly crucified to send a message to any NCR scouts stationed at the local camps and keep any attacking NCR troopers timid.[5][6]

By the time the Courier arrives in the Mojave Wasteland, the Legion has a firm hold on the town. Each side periodically sends out a party of skirmishers to try and weaken the other, but neither has any success in capturing territory and the battle lines are static. Between Camp Forlorn Hope and Nelson is a small no man's land littered with dying NCR troopers. Laid near their bodies are frag mines - most likely traps Legionnaires have placed should the Courier or other NCR troopers wander too close to help them. Because of the battle, morale at Camp Forlorn Hope has reached an all-time low. However, morale with the legionaries at Nelson is high. At Caesar's command, Dead Sea's legionaries are on the defensive, the psychological effect of their presence being seen as too valuable to be risked in a concerted attack on Forlorn Hope.[2] Ranger Milo, acting on his own, has taken it upon himself to remove one of the Legion's morale advantages by killing and thereby ending the suffering of the three crucified troopers being held hostage.[7] He believes that with the crucified troopers taken out of the equation, this would allow any attacking troops to enter without fear for the safety of their fellow troopers.[5]

Between Camp Forlorn Hope and Nelson is a small no man's land separating the opposing camps, littered with dying NCR troopers and frag mines. Attempting to talk to them will only have them ask the Courier to perform a mercy killing. However, killing any one of them openly will turn both the other dying troopers in the field and the active NCR troopers within Camp Forlorn Hope hostile. However, most of the troopers were removed in later patches, and the rest spawn dead.

The Courier may choose to help improve the situation of the NCR at Forlorn Hope, ultimately allowing Major Polatli to order Sergeant Cooper to mount an offensive and retake the town in the quest Restoring Hope. The size of the force depends on the Courier's actions. Alternatively, the Courier may choose to help Caesar's Legion in the quest We Are Legion, assassinating the officers at Forlorn Hope to strike a far more serious blow to the NCR's morale and organization than Dead Sea's men could manage on their own. When the Second Battle of Hoover Dam starts, if the Courier helped the NCR, then the camp will repel another Legion attack. If the Courier did nothing or completed the quest "We Are Legion", then the camp will be lost.

The Battle of Nelson occurred prior to the events of and is mentioned in Fallout: New Vegas.