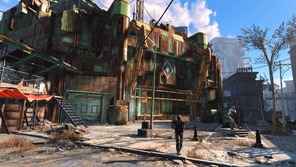 The Battle of Diamond City was a conflict caused when a super mutant horde launched an attack on Diamond City. The mutants were successfully repelled by the Commonwealth Minutemen, who arrived to defend the city.

The Minutemen's actions led to them gaining prominence throughout the Commonwealth. Over the following decades, settlements would begin calling on the Minutemen to aid in a number of situations.

Retrieved from "https://fallout.fandom.com/wiki/Battle_of_Diamond_City?oldid=3181676"
Community content is available under CC-BY-SA unless otherwise noted.