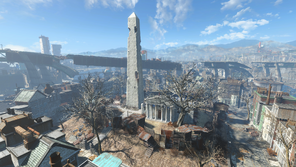 The Battle of Bunker Hill was a battle during the American Revolutionary War that took place in Boston.

Control of Bunker Hill would have given the British control of Boston Harbor, cutting colonial forces off. In response, colonial forces fortified Bunker Hill and surrounding elevated positions. Although inexperienced, the militia survived two frontal attacks by Royal regulars, only folding under the third, when the defenders ran out of ammunition.

Although a tactical victory for the British, the casualties among British soldiers and the sobering realization that the militia could hold its own against professional fighting forces created a change in strategy that would up favoring colonial forces even more: The cautious tactics gave militants the ability to retreat much more easily and prevented the British from capitalizing on any victories they achieved. The losses in the officer corps, such as Major John Pitcairn, would also haunt the British throughout the Independence War.

The Battle of Bunker Hill is mentioned only in Fallout 4.

The Battle of Bunker Hill was a real battle of the same name, likewise taking place on June 17, 1775.

Retrieved from "https://fallout.fandom.com/wiki/Battle_of_Bunker_Hill_(1775)?oldid=3234795"
Community content is available under CC-BY-SA unless otherwise noted.