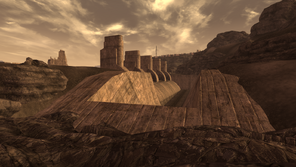 The spillway in question

The Battle of Arizona Spillway was fought between the Caesar's Legion and the New California Republic. It took place after the Battle of Willow Beach and was part of the attempt to force the NCR presence off of the eastern side of the Colorado River.

After the fall of Camp Willow at Willow Beach, Caesar's Legion attacked the New California Republic military camp at Arizona Spillway, one of two water overflow diversion tunnels underneath the highway surrounding the Hoover Dam. As a result of the battle, the camp was destroyed and the NCR lost its bridgehead across the dam, giving the Legion complete control of all territory east of the Colorado River.[1]