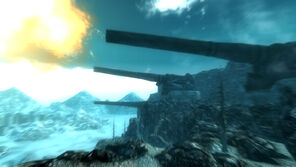 “200 years, and your humor is still bad. America liberating Anchorage? Now that was a good joke.”— Captain Zao, Fallout 4

With conditions deteriorating between the U.S. and China, a military presence in Alaska was established to prevent a possible invasion across the Bering Strait. With increasingly scarce oil reserves, a last deep-sea deposit below the Pacific Ocean was claimed by China before allegedly being sabotaged by American special operatives. Strained relationships spiraled downward into conflict as Chinese forces marched into Alaska, officially starting the Sino-American War. Under the command of General Jingwei, the Chinese Army took control of Alaska's oil pipelines and reserves.

Under the leadership of General Constantine Chase, the U.S. Army battled fiercely at the front lines of the conflict before Chase began deploying specialized power armor units, such as the first introduction of both the T-45 series. While the T-45 acted as an effective counter to the Chinese forces in the region, it was a stopgap measure, and merely stabilized the front, due to among other issues, the rapid consumption of energy cells. It would not be until the introduction of the T-51 series power armor,[6] series that Americans would begin pushing the Chinese back. Future power armor suits were further refined as the conflict dragged on, and the Trans-Alaska Pipeline was reclaimed. With American resources flowing through Canada, strained diplomatic relations between the two countries became problematic. Canada was militarily annexed with the near sabotage of the Alaskan pipeline.

With a combination of inclement weather, constant American bombardment, trench warfare, and U.S. power armor units attacking mainland China, the Chinese supply lines were severely weakened. By January 2077, the city of Anchorage was finally liberated and the Chinese presence was removed. A commemorative memorial was erected in Washington, D.C., in honor of the soldiers who fought and perished for the United States. Violence between America and pockets of Canadian freedom fighters continued throughout 2077, up until the Great War.

According to the Defense Intelligence Agency, the full clean up of the remnant Chinese force was achieved on January 28, 16:32PM, and the U.S. lowered their DEFCON status to DEFCON 3.[7]

The Battle of Anchorage appears in a simulation in the Fallout 3 add-on Operation Anchorage and in the intro of Fallout 4. Furthermore, it is mentioned in Fallout, Fallout 2, Fallout 3 and Fallout 76, and one of its participants was meant to appear in Van Buren.

Fallout 4 intro slide of the battle 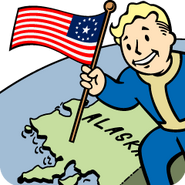 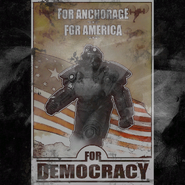 Anchorage poster
Add an image to this gallery

Retrieved from "https://fallout.fandom.com/wiki/Battle_of_Anchorage?oldid=3322141"
Community content is available under CC-BY-SA unless otherwise noted.