Battle of Adams Air Force Base

Battle of Adams Air Force Base 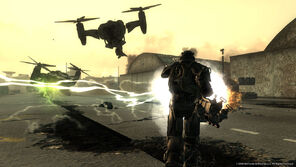 Hellfire units fending off the invasion

After recovering a Tesla coil from Olney Powerworks, the Brotherhood finalized their Tesla cannon project, their final chance at countering the Enclave's Vertibirds and winning the war. Rothchild had also managed to decipher the Enclave's encrypted telemetry data from their satellite relay station that was raided during the Battle of Rockland. The coordinates of the Enclave's communications were traced to Adams Air Force Base, their new headquarters. The Brotherhood began drawing out a plan to attack the base.

It was decided that the Lone Wanderer would sneak through the presidential metro to gain access to an unsecured area of the base, while the rest of the Brotherhood assaulted the base. The assault provided cover for the Lone Wanderer, who slipped through the base undetected and reached the satellite control tower and lowered the ramp for the mobile base crawler.

When the Lone Wanderer reached the base, a beacon was triggered, and the Brotherhood began the assault to cover the Lone Wanderer's entry. The Brotherhood fought waves of Enclave soldiers from sandbags and tactical positions set up on the runway with newly created Tesla cannons, with many Vertibirds undertaking hawk passes overhead. The Tesla cannons made short work of the Vertibirds, and the tide turned for the Brotherhood. The Lone Wanderer fought ahead to the satellite control tower and lowered the ramp for the mobile base crawler. Then, the crawler was raided. During this, Enclave Squad Sigma was eliminated. The Brotherhood pushed to the top of the crawler and reached the launch terminal for the Bradley-Hercules orbital strike missile satellite, and picked a target. The Lone Wanderer then went out onto the balcony and was picked up by a Vertibird commandeered by Sarah Lyons.

Missiles soon landed on the Mobile Crawler. With the Crawler's destruction, The Brotherhood had won the battle, putting an end to the Enclave's presence in the Capital Wasteland, and the Brotherhood-Enclave War. Though some stragglers would remain, the Enclave would pull out of region. Their exact status is unknown.

The Brotherhood would salvage whatever Vertibirds remained, going on to manufacture their own, and the base would eventually become the construction site for the Prydwen, a large airship that would take the Brotherhood to The Commonwealth to do battle with The Institute.

Paladin Danse mentions his sponsor, Paladin Krieg, being one of the soldiers that assisted the Lone Wanderer during the assault, and that he died during the battle.