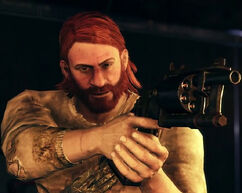 Batter is a member of the Free Radicals raider gang in Appalachia in 2103.

Batter was sent by Roper, leader of the Free Radicals, to get information on Crane from Duchess at the Wayward. He has been causing Duchess trouble at the Wayward and pulls a gun on her until a Vault Dweller from Vault 76 arrives. The situation is then either defused by the player character or by Mort, who is standing back with a gun during the confrontation.

Roper later notes that he did not have high hopes for Batter, considering him to be dumb and expecting him to fail and/or be killed.[1]

Batter appears only in Fallout 76, introduced in the Wastelanders update.

Retrieved from "https://fallout.fandom.com/wiki/Batter?oldid=3475524"
Community content is available under CC-BY-SA unless otherwise noted.