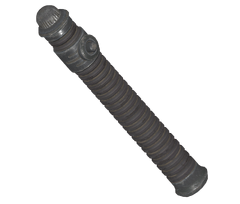 The baton is a melee weapon in Fallout 4.

Variants include the security baton, the shock baton, and the stun baton. It is carried by Vault-Tec security forces, alongside the 10mm combat pistol.

The baton may be the first melee weapon acquired in the game, lying on top of various containers and tables within Vault 111. It is a basic melee weapon with medium swing speed.

The security batons found in Vault 111 have a rare quality, in that they are automatically equipped and favorited whenever they are picked up. This is because the Sole Survivor does not have a Pip-Boy yet.