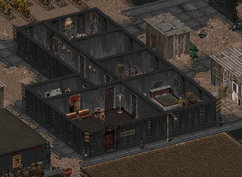 The bathhouse is a brothel in Klamath, owned by Sally Dunton.

Run by Sally Dunton, the bathhouse is just as dubious as one might imagine: there are beds in each room, rather than baths. There is no real benefit from paying for the "baths" as one can lockpick into the rooms and simply talk to the girls, one of whom, Jenny, gives some details about Vic.

Bathhouse appears only in Fallout 2.

Retrieved from "https://fallout.fandom.com/wiki/Bathhouse?oldid=3213391"
Community content is available under CC-BY-SA unless otherwise noted.