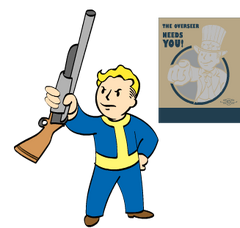 “Get up close and personal!”

Basher is a perk in Fallout 4 and Fallout 76.

“Get up close and personal! The amount of time you use the butt of your gun to inflict a bloody nose (or worse) at close quarters reflects how important you deem this perk to be. But it does increase the flexibility of more complex combat situations where you may not wish to switch between a favoured firearm and a different weapon type (like a punching weapon).”— Fallout 4 Vault Dweller's Survival Guide description

Gun bashing will not deal as much damage as melee or unarmed weapons, especially when the latter have been modded or paired with Iron Fist or Big Leagues. This is because:

That being said, gun bashing is still very useful; it is virtually guaranteed to stagger enemies, so it can buy valuable time against enemies who have gotten too close for comfort. By mixing up gun bashes with normal weapon shots, one can keep an enemy staggered while also conserving ammo by doing some damage for free (albeit at a small AP cost). Moreover, gun bashing can be used to artificially shorten the reload time of a weapon: while naively gun bashing while reloading will cancel the reload, gun bashing after a new magazine has been inserted into the gun will let you perform a quick melee attack and then have a fully loaded gun upon completion of the melee attack.

In addition, starting with rank 2 of Basher, being able to potentially cripple your opponent with a gun bash can be very helpful, especially if you cripple legs to allow yourself a retreat.

Loading screen slide
Add a photo to this gallery
Retrieved from "https://fallout.fandom.com/wiki/Basher?oldid=3428691"
Community content is available under CC-BY-SA unless otherwise noted.