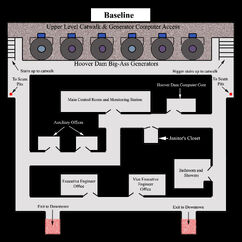 The Baseline is an area inside Hoover Dam.

Baseline is the home of the only two working power generators in Hoover Dam and the workplace/home of some anti-social humans the citizens of Hoover call the trogs (short for troglodytes). These folks are very burly, yet have very pale, almost albino skin. They mostly keep to themselves and prefer the dark solitude of the damp, musty corridors of Baseline.

The array of offices and storage rooms serve as living quarters for the trogs. When they are not in their respective living quarters, the trogs are performing maintenance on the two working generators and the main control room.

These are shared rooms for the trogs to sleep, eat, and live. However, these rooms are mainly occupied by the kinfolk's leader, Billy-Bob, and his immediate family.

While the showers and toilets work, they use the same toxic water that Otto and the scribes have been trying to filter. The trogs are smart enough not to use the showers and toilets for their water supply. Needless to say, they are a bit "ripe." One thing the trogs have been doing is hooking up a still to the shower using bits and pieces from the scribe's filtration rejects. So far no one has died or showed ill side effects from drinking the trog hooch, but then again, the still has only been in service for a short time. Maybe the player can upgrade the filter, or improve the brew? YEEEHAW!

Living quarters for the rest of the trog kin.

Baseline was going to appear in Van Buren, the canceled Fallout 3 by Black Isle Studios.

Retrieved from "https://fallout.fandom.com/wiki/Baseline?oldid=2295368"
Community content is available under CC-BY-SA unless otherwise noted.