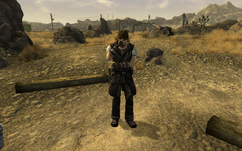 “Hello? Can you help me?”— Barton Thorn

Barton the Fink[1] is an unmarked quest in Fallout: New Vegas.

Head to Goodsprings source and towards the water trough, and the Courier will see Barton Thorn wandering around aimlessly. Talk to him, and he'll plead for the player character's help to save his girlfriend trapped by geckos. He will give the Courier clear directions on where to go: head towards the broken radio tower, then turn right. There, one should be going up an incline.

As the Courier goes further up, they should see a path forking off towards the right. There is a refrigerator, bed, footlocker and some loot (the optional cache). Be careful, however, of the three bear traps. This area is also a Wild Wasteland trigger area. Once at the top of the incline, one will discover that there is no one to be found, and as the Courier is heading down the hill, Thorn will run up to them and tell them he's "sorry," but he needed someone to clear out the geckos so he could get to the stash. At this point Thorn will become hostile and attempt to kill the player character. Killing him ends the quest.

The title is a reference to the Coen Brothers' movie Barton Fink.

Retrieved from "https://fallout.fandom.com/wiki/Barton_the_Fink?oldid=3425251"
Community content is available under CC-BY-SA unless otherwise noted.
... more about "Barton the Fink"
RDF feed
Has platform
PC +