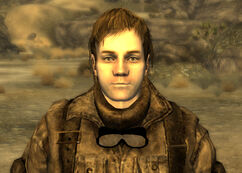 “Sorry I tricked you, but thanks for clearing out the Geckos. Now I can get to that stash up there...after I deal with you.”

Barton Thorn is a prospector living near Goodsprings in 2281.

Barton the Fink: Barton will confront the player character west of the camper in the area with the campfires, where Sunny Smiles teaches the Courier how to make healing powder. He will ask for the player character to save his girl, who is trapped by geckos on the ridge above.

The G.E.C.K. nicknames him 'Geckoman'.

Retrieved from "https://fallout.fandom.com/wiki/Barton_Thorn?oldid=3173009"
Community content is available under CC-BY-SA unless otherwise noted.