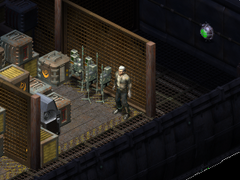 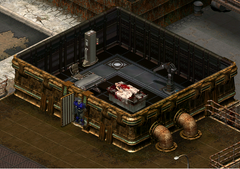 “Ah. Again, we meet each other. I go wherever good trade takes me. It seems you go where danger takes you. We are very much alike, yet, totally different. As always, I am pleased to be able to offer you my wares for trade.”

Bartholomew Kerr (also known as Nicholas Kerr) is a merchant from the Illinois region in 2197.

Bartholomew Kerr was a thin, rugged man in his thirties. However, time spent in the wastelands had aged him to look ten years older. He wore loose-fitting bandages as part of his attire. Kerr often traveled between the Brotherhood of Steel bunkers in various regions of the wasteland. He was trusted by the Brotherhood and he seemed to hold some allegiance to them. He had a knack for acquiring difficult to obtain items.

Some time around 2198, the Calculator's robots captured Kerr. His trading with the Brotherhood gave him an extensive knowledge of the locations and populations of several Brotherhood bunkers. This knowledge made Kerr a target that could not be ignored. A Brotherhood squad led by the Warrior was sent to Scott City, where Kerr was imprisoned. Kerr had been brutally tortured by the robots and had even undergone some sort of operation; a machine was implanted in his stomach, designed to keep him alive long enough to allow his brain to be removed. Unfortunately, a feeding tube was applied to his anus instead of his mouth, leaving Kerr to die a horrible death from internal hemorrhaging.

The Warrior can either barter or gamble with Kerr in Brotherhood bunkers.

"Nicholas" is Kerr's first name in some of the game's files.

Considering numerous references to Terminator series in Fallout Tactics Kerr may be a reference to a character Milton Bishop from Bethesda's game The Terminator: Future Shock. However, Bishop intentionally betrayed humans and ended up on an operating table with Skynet looking for information inside his head. Just like in Fallout Tactics, the Warrior's mission is to kill him, and just like Kerr, Bishop pleads to end his life.