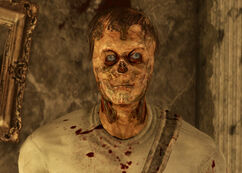 Reilly's Rangers
You Gotta Shoot 'Em in the Head

“Thanks. Now hold still, you don't want me to slip when holding sharp objects.”

Doctor Barrows is a ghoul and the resident doctor in The Chop Shop in Underworld in the year 2277.

Doctor Barrows runs Underworld's Chop Shop and has a disturbing sense of humor. He hangs around the Chop Shop most of the time, often looking in on Reilly, the human female he's treating. At night, he leaves to eat dinner at Carol's Place for a few hours, and then returns to the clinic. He sleeps for a couple of hours on site. Doctor Barrows is also mayor of Underworld, although, because of the small nature of the town, his civic duties take a backseat.[1]

He claims to be the foremost authority on the ghoul condition and he has managed to contain a pair of live glowing ones (named Meat and Ethyl) in an (inaccessible) observation cell. His business is mainly centered around the medical treatment of Underworld, but he and his assistant, Nurse Graves, are busily (but discreetly) studying a way to slow the advancement of the ghoul condition, and maybe someday reverse it. He is eager to get his hands on live samples from un-ghoulified humans.

Doctor Barrows can be found at The Chop Shop in Underworld or at Carol's Place eating.

Doctor Barrows appears only in Fallout 3.

The word "Barrow" means burial mound, keeping in line with the morbid theme of Underworld.

Sometimes he may become extremely buggy, resulting in him stating "I don't see anything wrong with you" to a player requesting medical attention, despite having every body part crippled. this may also be his only voiced line. Furthermore he will not walk, rather slide around the room, even when performing idle actions such as holding his clipboard. [verified]

Retrieved from "https://fallout.fandom.com/wiki/Barrows?oldid=3244194"
Community content is available under CC-BY-SA unless otherwise noted.
... more about "Barrows"
RDF feed
Has platform
PC +