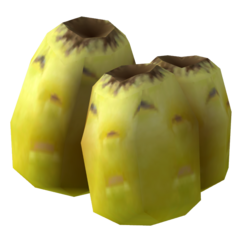 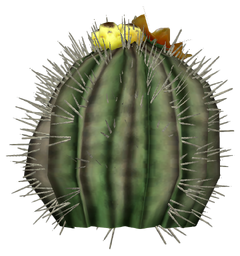 The barrel cactus fruit is a consumable item in Fallout: New Vegas.

Barrel cactus fruit is found on the barrel cactus, which appears as spherical cacti that can be encountered while wandering the Mojave Wasteland. They usually form in groups, with one large barrel cactus that contains the fruit surrounded by several smaller cacti. Like all other Mojave Wasteland plants, fruit-bearing barrel cacti will eventually grow back after being picked.

It is one of three components used to craft Desert Salad, and in the Honest Hearts add-on, homebrewed Nuka-Cola and Blood Shield.

The barrel cactus is based on the real world equivalent barrel cactus, native to the deserts of southwestern North America, with the largest specimens found in the Mojave Desert.

Retrieved from "https://fallout.fandom.com/wiki/Barrel_cactus_fruit?oldid=3464254"
Community content is available under CC-BY-SA unless otherwise noted.