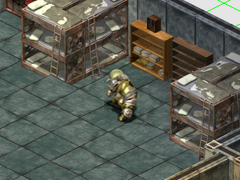 “A letter from General Barnaky to his wife, Maria.”

Barnaky's letter is a holodisk in Fallout Tactics.

A letter written by Simon Barnaky to his wife, Maria Barnaky.

It is found on Toccamatta's corpse during the Osceolla mission. If kept until the end of the game, it could be used to persuade the renegade general Barnaky to stop supporting the Calculator.

An item named General's locket serves the same purpose as the letter. The only difference is that the dialogue it triggers is slightly different.

Retrieved from "https://fallout.fandom.com/wiki/Barnaky%27s_letter?oldid=3505257"
Community content is available under CC-BY-SA unless otherwise noted.