Barnacles are stationary animals found in the Commonwealth and on the Island in 2287.

Barnacles are usually much larger than the smaller crustaceans that can often be found beside them. They can be encountered in coastal regions of the Commonwealth and the Island. They can be easy to miss due to their dark shell coloration, making them resemble rocks and harder to spot when traversing coastal terrain. Before the war, toxicity levels had been steadily rising in barnacle specimens, reported by the Nahant Oceanological Society as more than 34% above those in control tanks.[1]

The barnacle is protected by an extremely hard exterior shell that protects it from predators. Its outer shell has a dark green tint and closer to the mouth is tinted red. These barnacles have developed a unique defense mechanism that causes them to release a small cloud of radiation when it senses danger.

Upon approaching it, the barnacle releases a radioactive cloud that irradiates the Sole Survivor at a rate of +30 rads/s for a few seconds. The player character can activate the barnacle and cause it to release its radiation cloud if it hasn't been triggered yet.

Barnacles appear in Fallout 4 and its add-on Far Harbor.

The barnacle was designed by Gabrielle Adams and created in ZBrush. 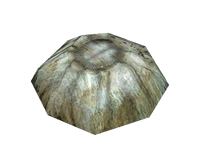 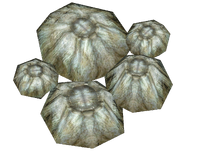 A cluster of barnacles