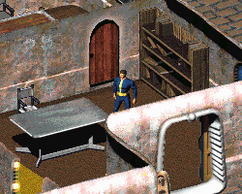 “I'd watch that kind of talk if I were you. It is NOT slavery. We take care of these refugees, and they have a good life... better than they would get in the wastes.”

Barkus is the stern, bureaucratic administrator of the Servant Allocation Center in Vault City in 2241.

Barkus is the Vault City Servant Coordinator,[1] he is responsible for overseeing servant work throughout Vault City, their assignments as well as acquisition. All the city's servants, old and new, come through his workplace, and anyone seeking one has to go through him.

Barkus appears only in Fallout 2.

When asking about servants, there's an easter egg dialogue chain only accessible with an Intelligence and Perception of 9 that mentions a scripter named Dan and compares him to the servants in a tongue-in-cheek manner.

Retrieved from "https://fallout.fandom.com/wiki/Barkus?oldid=3339718"
Community content is available under CC-BY-SA unless otherwise noted.