Bark scorpions are a genus of radscorpion native to the Mojave Wasteland, which, as their name implies, are mutated from North American Arizona bark scorpions. They are easily distinguishable from other species of radscorpion by their light, yellow-brown carapace and by their much smaller size compared to the common radscorpion.

Despite being a type of radscorpion, they are not allied with the other types of radscorpions and are frequently preyed upon by them.

Bark scorpions differ from radscorpions not only in size and coloration but also in attack methodology. Where radscorpions typically engage a target the second they see it, bark scorpions tend to hang back and try to flank their prey if at all possible. In addition to this, is their tendency to jump short distances if they detect prey that has gotten too close in a hurry.

They generally appear in groups of three or four, but can occasionally be found wandering alone. If encountered in numbers, they frequently try to surround their intended target. Bark scorpions are well camouflaged against much of the Mojave, making pinpointing their whereabouts quite difficult when at distance.

The scorpions themselves do not pose a significant threat, usually taking just a few hits to kill. However, they make up for it with their venom, which causes more damage over time, as well as blurred vision. Antivenom will negate the venom's effects. When one is stung by a bark scorpion, as with all poison, the game will alert them with a message that they are feeling "a little woozy."

Although their low Hit Points may indicate otherwise, bark scorpions can potentially be dangerous, even for mid-level player characters, if encountered in groups. This is due to the effect of venom stacking, which may lead to a rapid demise without the use of antivenom. However, large groups of the scorpions are rare (especially at low levels), unless one is close to an area known to be inhabited by scorpions, such as Hidden Valley or Scorpion gulch.

Bark scorpion hunters are larger and more aggressive than the regular bark scorpions. They are generally found in the same areas as their smaller counterparts and the two varieties can be difficult to distinguish between, especially in the heat of combat.

Bark scorpions are primarily found in the desert of the Mojave Wasteland outside of buildings and off the main roads. 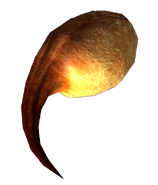 Four bark scorpions in the El Rey Motel
Add an image to this gallery
Retrieved from "https://fallout.fandom.com/wiki/Bark_scorpion?oldid=3129180"
Community content is available under CC-BY-SA unless otherwise noted.