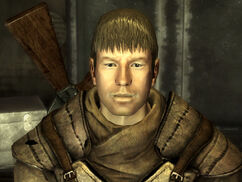 “They're a bunch of evil savages if you ask me. We're out here trying to save these good people from being enslaved by those bastards. I hope we kill 'em all.”

Quartermaster Bardon is the quartermaster for the New California Republic, stationed at the Hoover Dam offices in 2281.

Bardon's brothers and father all served in the New California Republic Army, and he is proud to be a career military man himself. He was recently relocated to Hoover Dam and voices his strong support of the NCR cause and excitement at being able to perform his duties on the front lines of the conflict with Caesar's Legion.

Retrieved from "https://fallout.fandom.com/wiki/Bardon?oldid=3457167"
Community content is available under CC-BY-SA unless otherwise noted.
... more about "Bardon"
RDF feed
Has platform
PC +  and Xbox 360 +