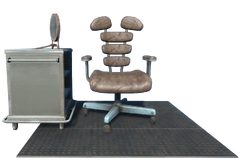 The barber chair is a constructible settlement object added in the Fallout 4 add-on Vault-Tec Workshop.

The barber chair can be built in any settlement. Once a settler is assigned, the Sole Survivor can use it to change their hairstyle without needing to go to an already existing barber, like in Diamond City, and gives a five point bonus to settlement happiness. All sessions are free of charge and give a Charisma boost that will last until overwritten with a different boost.

When manned, the chair will produce 1 income during business hours, usually 8 AM to 8 PM.

The barber chair is located under Resources → Miscellaneous in the workshop.

One can be found in use by Horatio in Vault 81.

Early descriptions of the add-on implied that barber chairs could also be used to change the hairstyles of other settlers (similar to barbershops in Fallout Shelter). However, this was omitted from the released version of the add-on for undisclosed reasons.

Loading screen slide
Add an image to this gallery
Retrieved from "https://fallout.fandom.com/wiki/Barber_chair?oldid=3146852"
Community content is available under CC-BY-SA unless otherwise noted.