Every point of Strength adds Damage Resistance (No Power Armor) 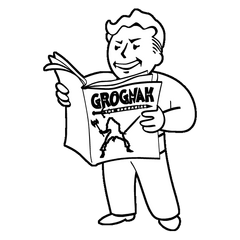 Barbarian is a magazine perk in Fallout 4 and a Strength-based perk card in Fallout 76.

It has 10 ranks, each received by reading 10 different issues of Grognak the Barbarian.

Increases Critical Hit damage incremental by +5% when attacking unarmed or with melee weapons.

Barbarian is a perk in the Nuclear Winter battle royale mode.

Barbarian is not the only Damage Resistance perk in Fallout 76, and similar perks may be used instead of or in addition to it, including:

Retrieved from "https://fallout.fandom.com/wiki/Barbarian?oldid=3428688"
Community content is available under CC-BY-SA unless otherwise noted.