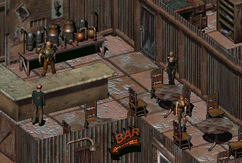 Bar patrons are visitors of John Cassidy's bar the Spittoon in Vault City courtyard in 2261.

These dusty-looking travelers[1] are spending their time in John Cassidy's establishment, the Spittoon. They're a mixed lot, some are merchants and traders who have dealt with the Vault City Guard, some even helping smuggle in alcohol via Skeev. They don't particularly like Vault City or its citizens... or ghouls, or super mutants. They spend their time in the bar relaxing and lamenting things like the increasing price for a day pass, and brahmin, and the ongoing drought.[2] They're a mixed lot, including even travelers from as far south as the NCR.[3]

Having only floating dialogue, they are making some remarks about the Vault Dweller, based on actions made in the recent past. They also tend to be somewhat brusque, calling the Dweller "Citizen". Other than that they can be heard telling about their experiences with some Vault City citizens and friends in New Reno, whom they never heard from again.

These bar patrons appears only in Fallout 2.

Retrieved from "https://fallout.fandom.com/wiki/Bar_patron?oldid=3415507"
Community content is available under CC-BY-SA unless otherwise noted.