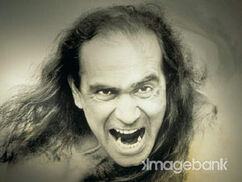 Banshee is the leader of the savage and cannibalistic Jackals in 2253.

Banshee is strong, perceptive, tough and looks more sinewy than bulky. He's going bald, but he doesn't know why; maybe he ate something bad. He's taken it out on his wife and kids. He killed his previous wife for accidentally burning his hair.[1]

One month prior to the arrival of the Prisoner, guerilla warfare drove Larsen's men into the mountains, slowly starving one of his men snapped and had to be killed. Larsen offered the body to Banshee and an uneasy alliance formed between the Jackals and the Baggers.[2]

By the time the Prisoner arrived at the Boulder Dome, the unsteady alliance between Banshee and Larsen has left them in a Mexican standoff, as both want to get in to the Dome and neither wants the other to live after that.[3]

Banshee and remnants of the Jackals eventually flee into the Texas Wasteland,[4] where they encountered Miles Reese who gave them the means to steal technology from the Brotherhood of Steel, meanwhile Miles, unbeknownst to Banshee, had infected the Jackals including Banshee with biological mini-bombs from a mutated G.E.C.K.[5] The Jackals, now heavily armed with Brotherhood technology, start ambushing Brotherhood patrols and proceed with plans of enslaving locals[6] and storming Fort Worth.[7]

Despite his apparent good fortune, Fort Worth worth would become Banshee's tomb, as after a particularly grueling struggle to retain power, Miles detonated the mini-bombs killing him.[8]

If the Prisoner is female, they can have sex with Banshee.[10]

Retrieved from "https://fallout.fandom.com/wiki/Banshee?oldid=3123905"
Community content is available under CC-BY-SA unless otherwise noted.