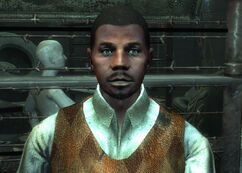 “What I meant was that my goods are of the highest quality, which I assume is what you are looking for.”

Bannon is the 30 year old[1] owner of Potomac Attire, a clothing store in the Rivet City marketplace, and a member of the Rivet City Council in the year 2277.

Born in 2247, Bannon is a snappy dresser and a shrewd businessman. His wares are high priced because he has no competition. His motto is "If you don't like the pants, go find them yourself." Cindy Cantelli has a crush on him and sits with him in church. She also leaves when he does. Bannon is one of three city council members, along with Doctor Li and Harkness. They meet on Monday mornings for a few hours to discuss city-wide issues. He has quite the ego but was chosen by Doctor Li to sit on the city council. She seems oblivious to his flaws.[1]

Bannon appears only in Fallout 3.

Dead Bannon in an endings slide

Retrieved from "https://fallout.fandom.com/wiki/Bannon?oldid=3329148"
Community content is available under CC-BY-SA unless otherwise noted.