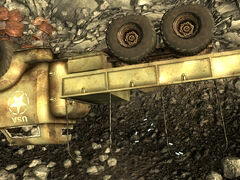 The 96 alien power cells right there for the taking.

The Bannister crater is an unmarked location in the Capital Wasteland to the east of Fort Bannister.[1]

The entire area is pockmarked with small craters, and one large crater and contains radscorpions. While the small craters hold nothing of value, the largest one houses an overturned military truck as well as a safe and a personal footlocker a short distance south of the truck. RadAway is found in front of the safe.

After The Waters of Life, an Enclave detachment will establish an outpost overlooking the large crater. This camp usually consists of several Enclave soldiers, an Enclave officer, and an automated turret. A single Enclave scientist will be investigating the truck at the bottom.

Bannister crater appears only in Fallout 3.

Retrieved from "https://fallout.fandom.com/wiki/Bannister_crater?oldid=3230759"
Community content is available under CC-BY-SA unless otherwise noted.