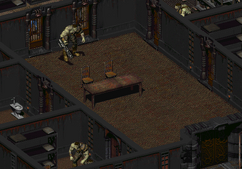 “If I ever find out where those damn prisoners ran off to, there's gonna be hell to pay!”

The bank guards are four super mutants stationed at the jail in Broken Hills Downtown.

They have been given the assignment to guard two prisoners, Franc and Manson.

The main guard's key can be stolen and used to free the prisoners. With high enough Charisma and Intelligence (both 7), he can be convinced to give the key.

The bank guards appear only in Fallout 2.

Retrieved from "https://fallout.fandom.com/wiki/Bank_guard?oldid=3073284"
Community content is available under CC-BY-SA unless otherwise noted.