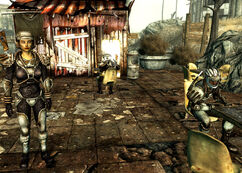 “Hahah! You are soooo dead! Hahaha!”

Bandits are characters found in the area around Rivet City in 2277.

Led by an informally chosen leader named Split Jack, bandits are roving bands of mercenaries that prey on water caravans for sustenance and profit. Wastelanders, Talon Company mercenaries, and even raiders and ghouls are welcome to join the group, as long as a few ground rules are adhered to.

To separate themselves from the other scum prowling the wasteland, Split Jack has instilled a policy of "metal," by which every bandit must wear distinctive metal armor and appropriate metal helmet headgear. This allows other bandits to recognize each other in the heat of battle, and victims know who to fear.

This sense of foresight also extends to Split Jack's cap-collecting schemes. He's brought in a new era of fiscal responsibility, with bandits realizing they can make money with the threat of continuous violence than by killing alone. This simple extortion is a relatively new idea in the wasteland, as survivors previously tended to gather what they could, as quickly as possible. Split Jack is also running what President Eden might call a "Dueling Democracy," with the power able to leave his hands at any moment if a challenger has the mettle (and metal) to face him in one-on-one combat.[1]

Bandits appear only in the Fallout 3 add-on Broken Steel.

Retrieved from "https://fallout.fandom.com/wiki/Bandit_(Fallout_3)?oldid=3486612"
Community content is available under CC-BY-SA unless otherwise noted.