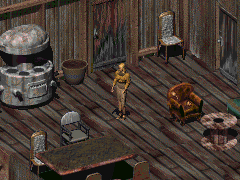 “Thank you for returning Jonny to me.”

Balthas' wife is an inhabitant of Modoc around 2241.

A sensitive woman who takes care of her son Jonny. Since he is gone, she is very sad.

Her son, Jonny, is missing. If the Chosen One says to Balthas he is dead, she'll weep. If Jonny is delivered home, she'll thank the Chosen One.

Balthas' wife name is misspelled - in-game she is named as Baltha's wife.

Balthas' wife appears only in Fallout 2.

Retrieved from "https://fallout.fandom.com/wiki/Balthas%27_wife?oldid=3339713"
Community content is available under CC-BY-SA unless otherwise noted.