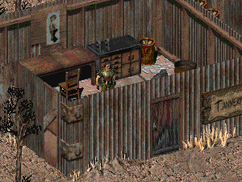 “Does that mean you'll help me? Thank you! Jonny was last seen playing cowboys and Indians with his dog Laddie out front. The two of them are inseparable; in fact, that's how we knew something was wrong. One day, Laddie came back without Jonny. We've been searching ever since. Take Laddie with you; maybe the two of you will be able to find Jonny.”

Balthas is an inhabitant of Modoc around 2241. He serves as the town tanner.

He is also a family man and loves his son, Jonny, a great deal. His recent disappearance causes him no end of pain, particularly when his prayers go unanswered.

Balthas' name is often misspelled as "Baltha" or "Balthus" in dialogue and in-game files.

Balthas appears only in Fallout 2.

Retrieved from "https://fallout.fandom.com/wiki/Balthas?oldid=3286771"
Community content is available under CC-BY-SA unless otherwise noted.