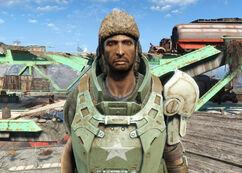 Sergeant Baker is a member of the Gunners in the Commonwealth in 2287.

Sergeant Baker is one of the residing Gunner leaders at the Quincy ruins. After the Quincy Massacre, he became one of the main leaders of the town, now a major Gunner base. He is usually found atop the old church where Sturges previously lived when he was the town's handyman. Baker has a watch post set up in the church's bell tower, where he stands watch over the town.

Baker appears only in Fallout 4.

Retrieved from "https://fallout.fandom.com/wiki/Baker?oldid=3250955"
Community content is available under CC-BY-SA unless otherwise noted.