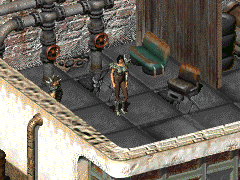 “After the War, only the Foolish remain. If I was brave enough, I would have taken my own life years ago. Instead, I pander to whatever gods of chance are left.”

Baka is the leader of the Fools at Scrapheap in 2161.

Baka is the leader of a gang called the Fools in the small town of Scrapheap. Clad in metal armor, she carries a CZ-53 personal minigun to battle. She gives the option of joining the Fools to the Vault Dweller, and with that, the task of removing their rival gang, the Crypts, from Scrapheap altogether. If they do eliminate the Crypts, she and the Fools take control of the generator and all of the Scrapheap with it.

Baka appears only in the Fallout demo.

Retrieved from "https://fallout.fandom.com/wiki/Baka?oldid=3329054"
Community content is available under CC-BY-SA unless otherwise noted.