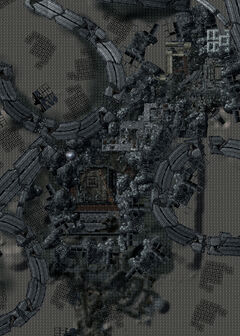 Bailey's Crossroads is a small district of Washington, D.C. in 2277. It is inhabited by super mutants and Brotherhood Outcasts. It is available through the Fallout 3 add-on Operation: Anchorage.

The district can be reached through Bailey's Crossroads Metro and consists of the metro exit, a small plaza, a large ruined building as well as an elevator to the Outcast outpost.

Bailey's Crossroads appears only in the Fallout 3 add-on Operation: Anchorage.

Bailey's Crossroads, VA is an actual suburb of Washington, D.C., located not far from its in-game location. It is known for large groups of apartment buildings, which may be the basis of the Outcast outpost and its surrounding areas. The suburb is named after Hachaliah Bailey, ancestor of James Anthony Bailey, of Barnum & Bailey's Circus. There is in fact not a Metro stop at Bailey's Crossroads.

Retrieved from "https://fallout.fandom.com/wiki/Bailey%27s_Crossroads?oldid=3450232"
Community content is available under CC-BY-SA unless otherwise noted.