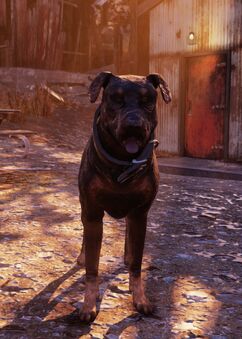 Badger is the Putnam family pet at Lewis & Sons Farming Supply in Appalachia, living there with his owners in 2103.

Badger appears only in Fallout 76, introduced in the Steel Dawn update.

Retrieved from "https://fallout.fandom.com/wiki/Badger_(Steel_Dawn)?oldid=3464563"
Community content is available under CC-BY-SA unless otherwise noted.