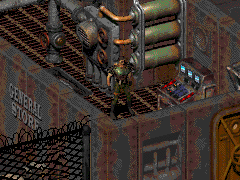 “He spits forth a horrific belch that defies the very heavens in its volume and depth.”— In-game description

Badger is one of the tanker vagrants on the Poseidon Oil tanker in San Francisco in 2241.

He is known by his crew members to be a nice guy, but to outsiders, he is rude and stubborn. He used to be in a band called There We Smolder. He looks to be a punk who often wears a half smile.[1]

Badger appears only in Fallout 2.

Badger, moments before death
Add an image to this gallery

Retrieved from "https://fallout.fandom.com/wiki/Badger_(Fallout_2)?oldid=3147885"
Community content is available under CC-BY-SA unless otherwise noted.