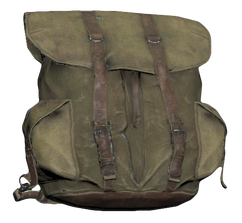 “Backpacks are new functional items being introduced with Ever Upwards that you can equip to increase your carry weight, so that you have room for more supplies when you head into the great outdoors. They are also customizable and can be modded to fit your fashion sense and personal tastes.”

The backpack is an armor item in Fallout 76, introduced in the Wild Appalachia update.

The backpack is a simple container made of green cloth. The standard version is secured with leather straps, and features a spacious main compartment and two separate side pouches. The backpack may be modified for additional storage or protection, as well as cosmetically.

As the level of the backpack increases, so too does the base Carry Weight increase that it provides, maxing out at an additional 60 carry weight at the max level (level 50). The backpack provides no benefit when entering a suit of power armor, as the equipment is removed and stored in the player's inventory automatically. Despite having a set value, backpacks cannot be dropped or sold.

After completing the Order of the Tadpole, the standard backpack is automatically unlocked for crafting and plans for modifications are available for purchase from the Possum vending machine. It can also be outfitted with a variety of functionality boosting mods, including options for increased Carry Weight, Resistance to Physical, Energy or Radiation damage, or slower food spoilage.

Backpack flairs, cosmetic attachments to a backpack, were first introduced with the Steel Dawn update. Season 3 has two unlockable flairs, the Red Rocket backpack flair (rank 32) and Armor Ace helmet backpack flair (rank 86). A T-51 helmet flair was scheduled to also make an appearance in season 3, but apparently is on hold until season 5.[1] Several other flairs, including a .50 round, human skull and various plushies, exist in the game files, but have yet to appear in future seasons or at the Atomic Shop.

Crafting of the backpack is unlocked after completing The Order of the Tadpole.

All modifications may be applied to the standard backpack as well as the small backpack. 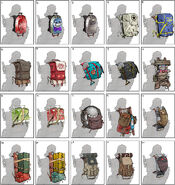 Retrieved from "https://fallout.fandom.com/wiki/Backpack_(Fallout_76)?oldid=3500743"
Community content is available under CC-BY-SA unless otherwise noted.