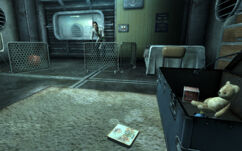 Baby Steps is the first main quest in Fallout 3.

Walk over to Dad

After the player character's father, James, speaks for a short while, he will lock them in the playpen and leave. A new objective is given at this point: open the playpen's gate. Walk up to the gate and activate it. The gate will swing open and the next part will start. This is also when one learns how to grab and move objects without adding it in the inventory. Approaching the chair next to the playpen will prompt a quick tip on how to jump.

The next objective is to find the "You're SPECIAL!" book which is lying right in front of the toy box. Once examined, the player character is prompted to decide what their initial primary statistics should be. The book gives a description of what each attribute does on each page. The last page allows for all statistics to be adjusted from one location.

If one is not satisfied with and wishes to change their SPECIAL stats, they will be given a final opportunity to do so after the "Escape!" quest.

James will come back into the room, aware of the player character's "escape" (even if they return to the pen and close the door). He reads his wife's favorite Bible verse, Revelation 21:6, to the Lone Wanderer. He then tells them to follow him to see if their friend Amata wants to play. After entering into the hallway, the game skips forward nine years to the Lone Wanderer's tenth birthday party, starting the "Growing Up Fast" quest.

You may not be able to listen to all the voices talking at the same time during the transition from being a newborn to an infant. These are the lines:

Retrieved from "https://fallout.fandom.com/wiki/Baby_Steps?oldid=3428837"
Community content is available under CC-BY-SA unless otherwise noted.