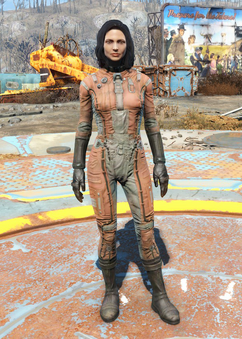 The BOS uniform is a piece of clothing in Fallout 4.

The uniform is comprised of three sets of standardized clothing. There are three different variants of this outfit, including orange, olive green, and jet black. The BOS uniform allows armor pieces to be worn over it, but it may not be modified at a workbench. All three variants have the same defensive stats, weight, and value.