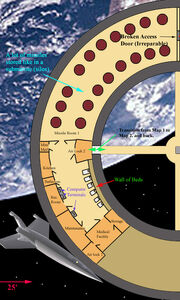 The living quarters is the first place the Prisoner will enter upon arrival at the space station. After leaving airlock 1, they will proceed into the main medical facility of the station. It is a large room compared to the others, with four hospital beds, a few medical cabinets, and an Auto-Doc. The Auto-Doc can be used in any time. There is also a storage room that can be accessed in the medical facility. Inside, the Prisoner will find all kinds of medical supplies; including various drugs and stimpaks.

Outside of the medical facility is the main living quarters' hall. Along the east side of the hall's wall, there are a half a dozen foldout beds and footlockers. Four out of five beds are folded out and look like they have been used recently. On the west wall, there are three computer terminals, but only one is currently active. It can be discovered from the computer that a launch countdown has begun, no matter how high the Prisoner's skill level is.

The maintenance room, rec. room, bathroom, kitchen, and mini-med room all go along the western side of the living quarters' hall, and each room is open and accessible. The maintenance room holds a mini-mechanic's lab, as well as several tools, parts for , a deactivated brain bot, and a couple of workbenches. The rec. room holds a ping-pong table, two computers used for gaming, a dining table for four, and a large projection television set. The bathroom has two showers and three toilet stalls. The kitchen comes complete with a packaged-food processor, cutting table, and a freezer. And lastly, the mini-med is a simplified version of the medical facility.

There is a doorway on the north wall that leads to one of two missile rooms. These rooms are locked unless the Prisoner can hack the security codes in the computer(s). If they are able to do that, they will find a room full of missile silos similar to what can be found in a ballistic nuclear missile submarine, like an Ohio Class Trident submarine (or the Typhoon mock-up in the movie The Hunt for Red October). The silos resemble red pillars that come out from the ground and enter into the ceiling. Each pillar is ten feet across and houses one nuclear missile (each missile holds six nuclear warheads).

Next to the missile room door, to the east, is airlock 2. Inside, the Prisoner will find approximately half a dozen space suits they can use. This airlock leads to map 2; the space walk. In order to get to map 3; the command center, they will need to space walk the inner stabilizing hull using magnetic boots.

Retrieved from "https://fallout.fandom.com/wiki/B.O.M.B.-001_living_quarters?oldid=2876129"
Community content is available under CC-BY-SA unless otherwise noted.