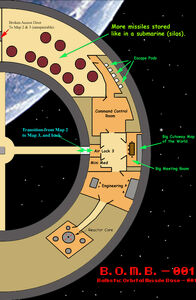 This airlock looks exactly like the previous airlock 2, but this airlock is a transition from map 2 to map 3 and back again. No space suits in this airlock.

This is a much slimmed down version of the medical facility. It basically just has one bed and medical supplies (med-kits, stimpacks, etc.).

Directly east of airlock 3 is the station's meeting room. A large cut-away map of the world is hung on the east wall with red thumbtacks precariously placed on Midwestern locales. An observant person (INT > 5) will notice that the thumbtacks are on the same points that the missile targeting solutions are assigned. In the center of the room is a large meeting table and eight chairs all around.

Directly south is engineering. This room has several computer terminals attached to large computer storage banks, similar to the spinning tape storage banks from the fifties. There are also four generators evenly spaced on the floor. Here, the Prisoner will also find an NCR engineer. They will then be presented with several choices; successfully sneaking into the command center, choosing to kill or knock out the engineer, take his armor and helmet (essentially his uniform), or use the Deception skill to try and infiltrate the command control room. Another option is to try and speak to the engineer using Speech skills, thus trying to convince the engineer that Presper has not been entirely honest with them. Another choice is to blow the snot out of the guy and not worry about him.

In this medium sized room is a large nuclear reactor with four smaller power nodes at each corner of the room. The reactor is very well insulated, but can be sabotaged using more than two dynamites or two C4 explosives (using more will not do any more damage). Using these explosives will breach the plutonium containment and will result in radiation all over the command center. A reactor meltdown will commence, which gives exactly five minutes before total meltdown. Lastly, causing this type of catastrophe will initiate the emergency missile launch protocol, giving four minutes to set new targeting solutions and one minute to get the hell out of Dodge. The one consolation about the emergency launch protocol is that six out of the eight missiles have a 50% chance of missing their assigned target, so if the Prisoner can only reprogram half the missiles in the four minutes, there is still a chance that all the missiles will miss their targets. It's a gamble, but it's the price one pays for using meathead tactics. The same rules apply if the Prisoner uses Science on the reactor and programs it to overload.

This is the ultimate room where the Prisoner can save the world or help destroy it. There is a large monitor on the east wall that shows a close-up section of the Mid-West as seen from B.O.M.B.-001. Several red targeting reticules highlight different designated targets; Hoover Dam, New Canaan, Shady Sands, New Reno, Vault City, Denver, Brotherhood Main Bunker, and Maxson's Bunker (although the targeting computer uses old, pre-War names for the locations). Directly underneath the large monitor is the targeting computer. This is where one may reprogram the targeting solutions. If the Prisoner chooses to disarm the missiles, they will be able to disarm all but two missiles. Since the computer was programmed to "cleanse" the areas that had been exposed to the New Plague, it will refuse to halt all launches and insist that two missiles be launched. They must choose two targets to hit – empty, uninhabited areas are not an option. If chosen not to choose, then the computer will choose the two largest populations. Also, reprogramming targeting solutions takes a fairly long time. Since both the station and the Earth are moving, the computer must calculate for optimal launch trajectory, atmosphere re-entry, target positioning dependent on the Earth's current facing relative to the station, distance, fuel, and weather. All these factors could take some serious calculating time, especially since none of these variables are constant; the core information must be extracted on the fly and then worked into a target solution. It is quite possible that the Prisoner will not have time to reprogram all the missiles, so they would have to choose carefully which ones to change first. Dr. Presper can be found fiddling around another computer that is in the left hand corner of the room. If decided to muck around this computer, it will be found out that Presper was using it to calculate explosion scenarios, radioactive fallout disbursement patterns and half-life, and other brainiac calculations. The center of the room holds the computer processing core, a large, metallic object that is shaped like a smaller Zax computer.

Directly north of the command center is the hallway for the escape pods. These are accessible at any time and hold two people each. There are five pods total. All one needs to do is access the control panel over one of the escape pod doors and accept the emergency escape request. One of the ideas I was toying with to keep the ending of the game "Fallouty," was that the escape pod does not have a designated landing site. Because of its limitations, the pod will land like a '60's space capsule, parachutes and all, in an unknown, remote area. This way the player will get an end movie CG of having his PC leaving the pod and wandering into the sunset of an unknown land – play sad music and shed a tear. Then roll the " and what happened to..." stills and narratives.

This is where three of the eight missiles that are going to be launched are stored. The ten foot thick, red silos come out of the floor and extend into the ceiling and form two rows of six silos each. The Prisoner can access the mini-computers that are attached to each silo and see which silo has a missile in it and which do not. Some of the silos show empty because the U.S. government never got the chance to fully stock B.O.M.B.-001 before the war started. However, for those silos that have a missile in them, one can try to sabotage the missile launch system on a per silo basis. Unfortunately, this type of Science Boy tactic takes quite a bit of time, and the likelihood of sabotaging more than five silos in less than two hours is highly unlikely. But, sabotaging the silos would cause a systems overload, which in turn would cause the station to eventually blow up – a couple of minutes after the non-sabotaged missiles launched.

Retrieved from "https://fallout.fandom.com/wiki/B.O.M.B.-001_command_center?oldid=2863511"
Community content is available under CC-BY-SA unless otherwise noted.