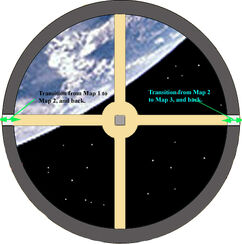 This is a steel-reinforced support system that maintains the structural integrity of the round missile station. These are round tubes with a flat walkway in-line with the rest of the station. In order for one to walk on the hull support, they would need magnetic boots (supplied in airlock 2, along with the space suits). Going in a straight line, one may walk to the east side of the missile station and enter the command center through airlock 3. Of course, they must contend with the security bots on the central hub.

The central hub is the direct center of the missile station. The platform is large enough to hold a radio antennae dish, a handful of people, and two ill-tempered security bots. The security bots have magnetic treads that allow the security bots to move along the walkway without floating off into space. An adept Stealth Boy may sneak passed the bots, Combat Boy may choose to blow the bots away with a pulse gun or EMP grenades and the Science Boy may develop a way to depolarize the bots' magnetic treads and have the bots float away harmlessly.

Retrieved from "https://fallout.fandom.com/wiki/B.O.M.B.-001_Space_Walk?oldid=3175597"
Community content is available under CC-BY-SA unless otherwise noted.