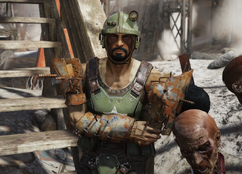 Axel is a member of the Raiders residing in the Crater in 2103.

Axel joined the raiders at some point before their return to Appalachia. He guards the main bridge into the Crater.

He is generally honest but will lie to protect those he cares about.[1] Once, he protected Creed from being beaten by Surge for cheating during a card game by covering for him and was beaten himself.[2] He will even risk death or exile by covering for his girlfriend Barb.[3]

From Russia With Lev: Axel can be interrogated to determine who the snitch is. Despite his assertion that he is the traitor, he is merely covering for someone and is not, in fact, the snitch.

Axel appears only in Fallout 76, introduced in the Wastelanders update.

Retrieved from "https://fallout.fandom.com/wiki/Axel?oldid=3364668"
Community content is available under CC-BY-SA unless otherwise noted.