Show HP, equipped weapon and its ammunition count of any characters, creatures and robots you examine

Enemies' specific damage resistances are shown when targeted in V.A.T.S.

You can view a target`s specific damage resistance in V.A.T.S.

The ability to make creatures turn away from the player character. There is a varying % chance that it will succeed. 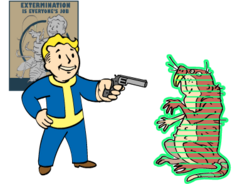 Awareness is a perk in Fallout, Fallout 2, Fallout 4, Fallout 76 and Fallout Tactics. It is also a skill that was to appear in the canceled Fallout: Brotherhood of Steel 2, where skills in this game work like perks do in other Fallout games.

Shows the HP, equipped weapon, ammunition type, and ammunition count of any characters, creatures, and robots when examining them.

“If additional information is what you crave, then this is a most helpful augmentation to your V.A.T.S. combat interface, as it allows you to see what a foe's resistances are and use weapons they are susceptible to.”— Fallout 4 Vault Dweller's Survival Guide description

While this will reveal resistances for an enemy (in addition to a crossed-out symbol for immunities), it will not display any special characteristics. The main example of this is that ghouls are listed as having 1000 radiation resistance, when in truth they have a special effect that lets radiation damage heal them, making the resistance moot.

Also, while previous versions of Awareness (and for Fallout: New Vegas, the similar Living Anatomy) also revealed the enemy's health, Fallout 4's version only reveals the enemy's level, which can sort of be used to approximate how tough the enemy is.

“To defeat your enemies, know their weaknesses!”

The player character acquires the strange ability to make creatures temporarily turn away from them, although done so with varying % of success.[1]

Retrieved from "https://fallout.fandom.com/wiki/Awareness?oldid=3438738"
Community content is available under CC-BY-SA unless otherwise noted.